We believe that theater is for everyone. We want our programming to be accessible to all children and we are committed to not letting tuition be a barrier. Here are some completely free resources to get you started making theater!

We’re on Youtube! Check out our Living Room Theater Youtube channel for free theater games and activities! These videos are geared for young artists ages 6 – 14 and include some games that you can play alone and others that you’ll want to grab a friend for. Look for a new video every Wednesday at 10 a.m. PST. Don’t forget to like and subscribe so we can keep releasing free content.

Each month you can find a new coloring page designed by our illustrator, Juanita Crooks. Each page will be based on a scene from a play or a musical. Download and print her coloring page to learn about theater through art. Send us a picture of your completed coloring page to be featured on our social media! Check out this month’s page below.

This is one of Shakespeare’s most famous plays.  It is a comedic fantasy about four young lovers from Athens who run into the nearby forest for various reasons surrounding love and jealousy.  Little do they know, the forest is home to a fairy kingdom ruled by King Oberon and Queen Titania.  They are angry with each other and have been fighting for some time.  Seeking revenge, King Oberon tells one of the other fairies, a mischievous younger fairy named Puck, to give Titania the juice from a magical flower so that she will fall in love with whomever she first lays eyes upon.  Also in the forest are a group of Athenian actors, rehearsing a play that they hope they will perform for the Duke.  Puck casts a spell on the silliest of these actors, Bottom, so that his head turns into a Donkey’s head!  He then gives Titania the love flower and when she wakes up she sees Bottom and falls madly in love!  The story gets more entangled and more magic goes wrong, but in the end the four young lovers each get married and the fairy kingdom settles down. 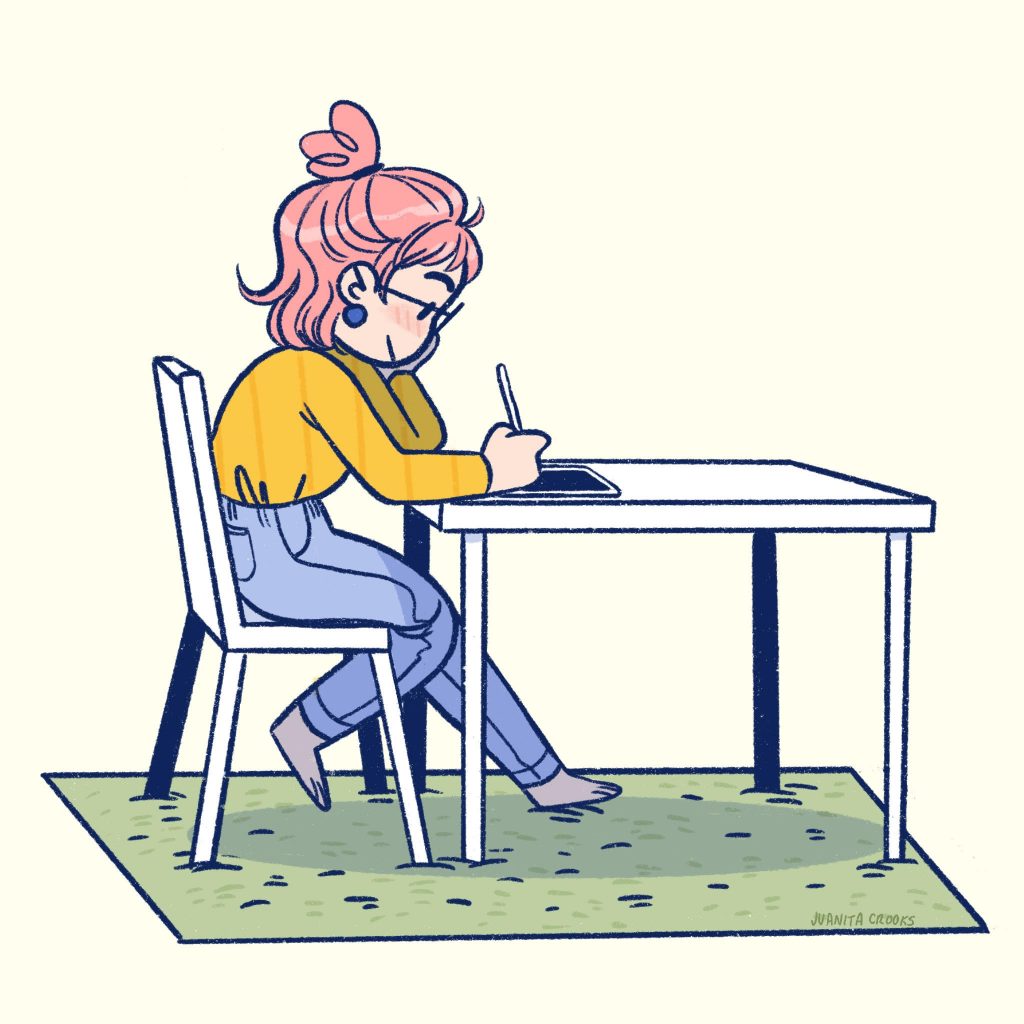 Alice in Wonderland is a fantastical tale written by Lewis Caroll.  This story begins when a young girl named Alice sees a white rabbit in a waistcoat run by her, pull out his pocket watch and declare that he is terribly late before jumping into his rabbit hole.  Alice, curious, runs after him down his rabbit hole and into a whimsical, chaotic, and at times scary world.  She meets a Cheshire Cat, a Caterpillar, and Tweedle Dee and Tweedle Dum.  She has a wild tea party with the Mad Hatter, the March Hare, and the Dormouse and plays croquet with the Queen of Hearts.  Her adventure gets more and more chaotic and magical until she wakes up in a start, sitting with her sister alongside the river, right where she was when she saw the rabbit.  It was all a dream.  Perhaps.  This book has been adapted for the stage as a play, a musical, and a children’s show by various playwrights including Henry Savile Clarke, Anne Coulter Martens, and Jonathan Yukich, to name a few.

Almost, Maine is a play written by John Cariani and set in a small town in Maine called Almost.  The play is made of several short scenes each telling a different story about the various people who live in this small town.  Their stories are about love and loss, and show just how much love exists in Almost, Maine and all the different ways it looks.  This coloring page is based on the first scene, titled Her Heart.  In this scene, a woman named Glory has traveled to Maine and decided to pitch a tent in a backyard she found that had a good view of the Northern lights.  Soon the man who lives at that home wandered out to see who was in his backyard.  Glory soon tells him that her husband just died and she wants to see the Northern Lights for him.  He finds out that she is carrying her heart in her bag because it got so heavy that it broke.  The man, named East, is a repairman and offers to fix it.  This play is sweet, dramatic, and in some ways, magical.

The Lion, the Witch, and the Wardrobe

The Lion, the Witch, and the Wardrobe is a story originally written by C.S. Lewis in his series The Chronicles of Narnia.  The story is about four siblings who are staying with a family friend during World War Two.  The youngest, Lucy, discovers a magical, wintery land hidden in a wardrobe and ventures in, meeting a Faun named Tumnus.  He tells her about an evil White Witch who has put a spell over Narnia so it is perpetual winter.  Lucy rushes back to tell her siblings about Narnia, but they do not believe her.  After some convincing, they all stumble into Narnia together and go on a magical adventure.  They meet talking animals, the White Witch herself, and a giant lion named Aslan.  Together they have to take on the Witch and save Narnia.  This magical tale has been adapted for the stage as a musical and as a play.   Some of the playwrights who have created their own adaptations of this story are Hiawyn Oram, Joseph Robinette, and Irita Kutchmy, to name a few.

Stocking Stuffers by Geff Moyer is a fun spin on a Christmas play, spotlighting well known holiday characters including the Easter Bunny, Cupid, Ezekiel the Pilgrim, several elves, and Santa Claus!  One of the vignettes in this play is about Donner and Blitzen, two of Santa’s reindeer.  They are working on getting back into shape after the off season so they’re ready to pull Santa’s sleigh on Christmas.  They get in some trouble in the end because of an accident involving Grandma…

Fun Fact:  This play was performed by our hometown theater company, where we got our start.  We got our name from them, The Angelica Players, and are so happy to call them home.

Luna is a play written by Ramon Esquivel.  The story is about a young girl named Soledad who is the daughter of migrant farm workers.  Her family is constantly moving because of work and Soledad is always the new girl at school.  She struggles making friends because everyone already has their friend group and doesn’t want to talk to her.  Soledad is frustrated and sad, but she finds comfort in books, the stars, and the moon, Luna.  Soledad  realizes that no matter where she moves, Luna is always there.  They become best friends and play games, create dances, and tell jokes with each other.  Then, Soledad meets two new kids named Frida and Emilio, who also seem lonely.  Soledad is shy and nervous, but Luna convinces her to go make friends with them because, “Taking risks is hard to do, but taking risks builds courage, too.” The rest of the story evolves as Soledad learns more about the wonders and challenges of friendship. 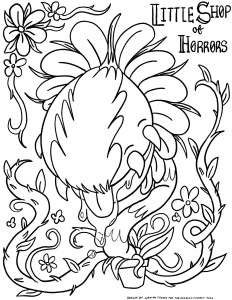 Little Shop of Horrors is a horror comedy rock musical written by Alan Menken and Howard Ashman.  Seymour works at a small flower shop on skid row and has a big crush on Audrey, his friend, but is too shy to tell her about it.  He starts taking care of a mysterious fly-trap-looking plant and he names it Audrey II after his crush.  Soon he realizes that this plant is not a normal house plant.  It can talk and sing, and, most horrifyingly, it eats human blood to survive!  Audrey II grows and grows and Seymour tries to control it while keeping his friends safe.  This is a spooky show, so have fun coloring in your version of Audrey II and making her super scary! 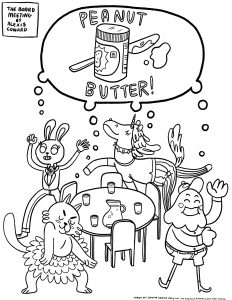 The Board Meeting is a short comedy written by Alexis Coward, a London-based playwright, actor, and comedian.  This story is about four characters, Frankie, a Rabbit business person, Grayson, a Postperson, Marin, an Emo Unicorn, and Quinn, a Cat wearing a tutu.  Each of these characters are the imaginary friends of Laya.  It has been years since they have seen each other because Layla has grown up and hasn’t played with her imaginary friends in years.  However, they call a board meeting because something has changed and they are worried that Layla may have fallen into a coma and need their help to revive her.  They all have to work together, remember their childhood, and try to save her.  Color in these characters how you imagine them! 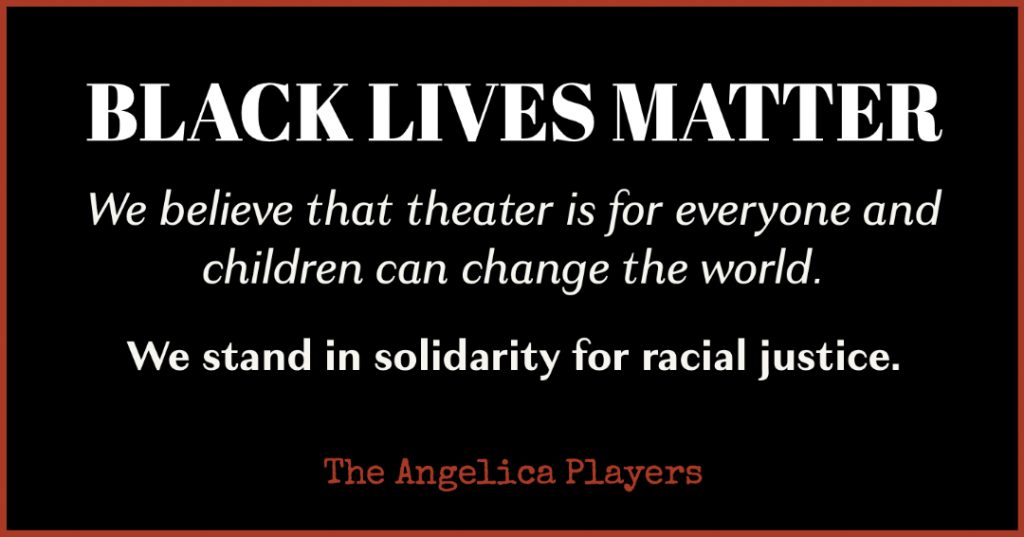 We want to support families and inspire young artists to take part in the greater conversation about race that is happening in the world right now. Having these conversations with children can feel intimidating and overwhelming, but it is also such an incredible opportunity to learn how to address injustice together. We have gathered a short list of anti-racist resources to help you begin and guide those conversations.

PBS Kids Read Along | You Matter by Christian Robinson

10 Tips for Teaching and Talking to Kids About Race | EmbraceRace

7 Ways to Support the Young Activists in Your Life | EmbraceRace

Activity and Coloring Books | Ashay By the Bay